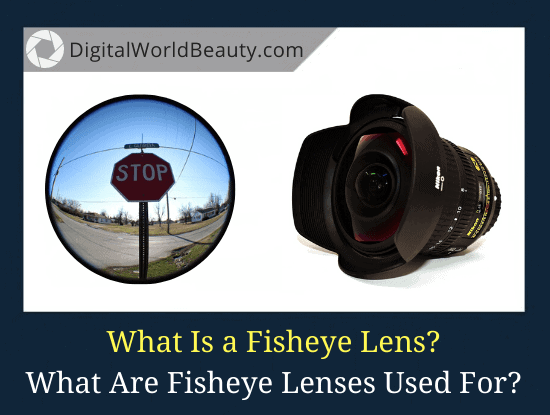 Welcome to my guide on fisheye lenses and what they are used for!

There are a lot of lenses available on the market and most people are confused about where and how exactly to use them in photography.

One of those are fisheye lenses which have become widely popular among photographers.

If you ever considered getting into fisheye lens creative photography, this post is for you.

What Is a Fisheye Lens?

What is a fisheye lens?

To keep it pretty straightforward, a fisheye is a super wide-angle lens that has a viewing angle close to 180 degrees.

Because of its unique feature, it creates an image that is visually distorted to make it seem like a wide panorama.

Why is a fisheye lens called that?

In 1906, an American physicist Robert Wood, coined the term fisheye with the basis on how a fish’s view would be in an ultra-wide hemispherical view.

The first noted practical use of the glass was in 1920 when it was used to study cloud formation in meteorology. Since then, it was also coined as the “whole-sky lens” because of how it captured a wide view of the subject.

(This means that a fisheye lens does an amazing job capturing the firmament.)

It is also popular for:

… because it is capable of capturing an extremely wide image of around 180 degrees.

Filmmakers and photographers have used it mainly to give an illusion of distortion. The effect makes it seem as if the borders were wrapped into a spherical shape.

What Is a Fisheye Lens Good For?

Why use lens in extreme sports such as skateboarding? This is to capture specific moves done by the athlete to showcase shots from a different point of view.

With the edges curved and all, the eye immediately goes to the subject and focus on that.

Another thing a fisheye is good for is to create a “peephole” effect.

If you’ve ever watched a film where actors use doors with peepholes, then that is the exact lens they are using to achieve such a shot. 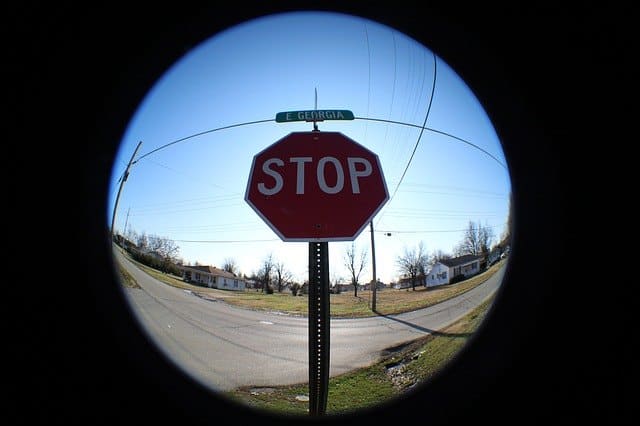 Lastly, where this lens is mostly used unlike any other is in space.

The reason comes as no surprise. More of the surrounding is captured into the frame when it’s in use.

The fisheye’s ability to have a large depth of field and wide angle of view means that the NASA is unlikely to miss anything in space.

(It is for this same reason why it’s the glass of choice for most photographers who take photos of the night sky.)

This post is excellent talking about wide angle lenses in greater detail.

What what is the difference between a fisheye lens and a wide angle lens?

A fisheye lens is an exaggerated wide-angle lens.

One noticeable difference you will see is that the former produces a distorted edge unlike the latter. The fisheye distortion is vertically extreme where it bends in the middle which is why the subject at the center is the least distorted.

Generally, the lens is more prone to distortion at an image’s periphery is the focal length is shorter.

The reason why wide-angle lenses use a corrective lens element is to remove the chances of image distortion or pincushion distortion.

On the other hand, the fisheye lens takes advantage of this effect that’s why the corrective lens element is not put into place.

It is important to note that there are different types of fisheye lenses:

The photo I shared earlier is a great example of a circular fisheye lens.

It gives a 180-degree angle of view on the entire periphery namely: vertical, horizontal, and diagonal with a distortion that is like a barrel.

This simply means that the produced image is contained within a circle because of the vignette effect in the corners of the frame.

This effect is also known as the “tunnel vision” effect.

It is a 180-degree image with a diagonal angle-of-view where the edges are the areas of the picture that is mostly distorted leaving the center “normal-looking”.

Unlike we saw with the circular fisheye forming a circular image within the frame, a diagonal fisheye lens fills the frame entirely.

And it’s often used for traditional landscapes and interior photography.

They were made for small format devices such as security cameras. Because of the maximum coverage, fisheye lenses are used in these miniature digital cameras.

Overall, these are perfect to use on taking pictures of a large crowd.

Why Use a Fisheye Lens? (7 Reasons)

Why would you use a fisheye lens?

First of all, you automatically emphasize a subject by using this lens. It adds character by drawing the eyes immediately to the center while disregarding the elements on the edges.

Here’s an interesting video how this type of glass took over the music industry:

Below are the 7 reasons why this glass is great in photography.

When not used correctly, you definitely cannot appreciate what it can do to your photos.

You just need to strategically use it to your photo’s advantage.

When you achieve this, the result is very satisfying and will make the fisheye lens your preferred lens over a wide-angle lens.

Certain editing programs such as Photoshop will allow you to control how distorted an image will be. By doing this, you can turn a very spherical image into a super wide-angled shot.

In general, anything that is straight is curved by this lens.

So, in theory, capturing something that is already spherical will make it less obvious. A perfect example of this would be in round staircases or tunnels.

You can manipulate lines and give your viewer a second look by pointing your camera upwards while using a fisheye lens while making the ground still part of the shot.

When you need a wide-angle shot of your video or photo setup, this lens can give justice as to how much goes into production just to achieve beautiful imagery.

Contrary to its most popular use, a lot of people don’t know that you, too, can use it for portrait shots. Just make sure to have the subject stay in the middle to avoid any face distortions to occur.

Post-processing can probably achieve what a fisheye lens can do, but it’s just another step instead of capturing an image exactly how you want it to be right off the bat.

An interesting tip would be to just allow your lens to point anywhere in your surrounding and you would be surprised how an image will leave you amazed.

Fisheye Lens for Your Phone 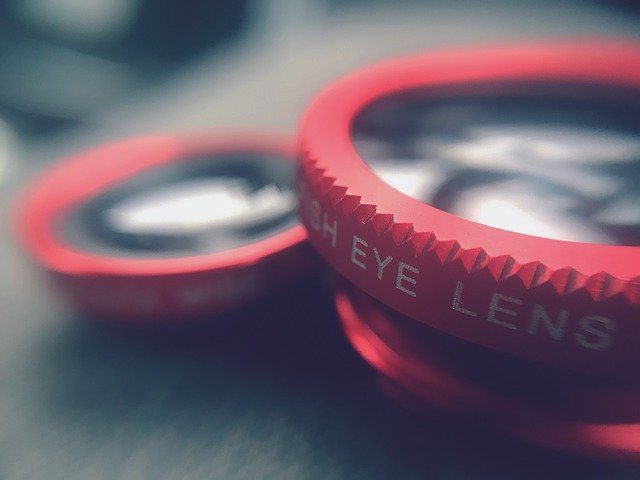 In here, I’d like to add a short section on fisheye for your smartphones.

Nowadays with phones possessing better cameras, it comes as no surprise when lens accessories follow suit because of an increase in demand.

Probably the most popular one would be Olloclip where a selection of lenses can be attached to your phones’ camera and give effects that are not native to the built-in camera system.

One of these lenses is the fisheye giving the same effect as the ones used by high-end DSLR cameras.

With all the information that you have just read about this fascinating fisheye lens, I won’t be surprised if you end up shopping for one right now.

If you’re looking for places to buy one online, I suggest you check price and availability on:

In my experience, most people shop on Amazon but I’m sharing a few additional resources to keep your options open.

There are a lot of creative lenses that you can get from the market today but no other lens can give you the same level of creativity than the fisheye (or tilt-shift lens).

In the end, a creative eye always helps but it would not hurt to have a little help from available accessories that you can attach to your camera.

All it takes now is to widen your boundaries on what type of image you would want to produce.