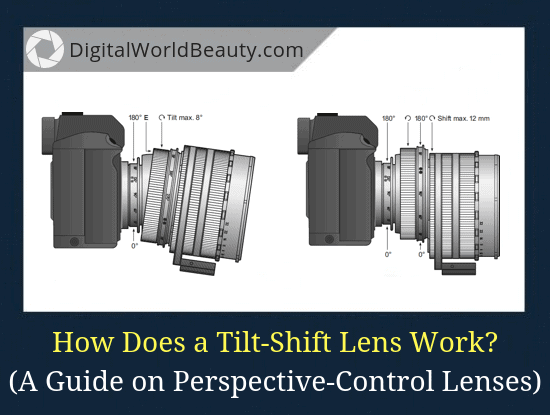 When it comes to lenses we often focus on things like zoom, autofocus, focal length, aperture.

But in this post we’ll discuss the perspective-control lenses that create a tilt-shift effect.

What Is a Tilt-Shift Lens?

Tilt-shift lenses are those which can have their optics tilted or shifted in relation to the image sensors.

They rotate while giving them room to tilt and shift in multiple directions.

And thanks to this we have an opportunity to work with perspectives and achieve original, unusual effects when shooting.

These type of lenses also have perspective correction applications that help maximize or minimize their depth in photography.

Check out Eric’s video below on tilt shift lenses (using his Canon TS-E 24mm lens as an example).

How Does a Tilt-Shift Lens Work?

Let’s dissect the terms “tilt” and “shift” to understand how these perspective-control lenses work.

The tilt-shift capability is entirely based on the Scheimpflug principle that helps minimize or maximize its in-depth photography.

It might sound quite complicated but it simply means you have room to adjust the sharp focus.

The typical lens, sensor plane, and focus plane can be lined in parallel.

That way if you focus the lens 6 feet away, everything surrounding the object checks into sharp focus.

An object 5 feet away under focus will remain so alongside everything surrounding it.

The interaction of the lenses can be adjusted by tilting the lens from right to left, affecting how they interact. There is a vertical focus plane on the frame meaning everything at the back and the front will remain in focus.

(This is evident when using a wide aperture, where the area to the right and left fall out of the focus range.)

What about the “shift” part?

The shift feature gives the lens an optical shift room when compared to the image sensors.

These special lenses project an image circle much larger than other typical lenses.

What is a tilt shift lens used for?

Once again, tilt shift lenses allow you as a photographer to go beyond the normal restrictions of DOF and perspective.

They have a lot of optical tricks that could not be otherwise produced digitally, and that’s why tilt shift lenses are a must in certain landscapes, architectural and product photography.

People doing architectural photography have most use for shift.

Macro and nature photographers have most use for tilt.

(More on that later.)

How do you do the tilt shift effect?

The effect can be achieved optically using a special lens we’re talking about here or in Photoshop.

(Some photographers would say that using advanced software Photoshop is quite easy, as long as you know how to do it right.)

But in here, I’ll focus on the effect using the actual tilt-shift lenses.

What Is a Tilt-Shift Effect?

(This explains why our photos are typically rectangular rather than round.)

When trying to capture a tilt-shift photo it’s all about perspective.

Any shift in your camera lenses separates the center of perspective. Photographers can capture image modes of certain images above or below the normal horizon of the photograph.

For that reason, shift lenses are highly popular for architecture photography.

But it also helps when shooting landscapes.

The thing is that with landscape photography it’s pretty hard to get a good depth-of-field of both foreground and the background.

For example, the flowers up front and the castle in the back.

Dmitriy Evtifeev provided a good illustration of how this works.

The red line marks the zone of the best focus.

As you can see it is at aperture f/16 do we get to capture both objects with a good DOF. But at the same time both objects are on the borders of the depth of field and won’t be super sharp.

Not only that, but as Dmitriy correctly pointed out, the f/16 is the aperture value that that exceeds the diffraction limit for most modern cameras and therefore also contributes to the reduction of photo sharpness.

And this is where the tilt effect saves us:

It allows us to position the DOF not perpendicular to the image plane, but in accordance with the principles of Scheimpflug.

This way we capture well the flowers closer to the camera and the castle in the back.

(I hope with images it was easier to understand.)

What Do You Use a Tilt Shift Lens For?

We figured out what the purpose of a tilt shift lens is, but when/what photography genre do you use it for?

Let’s discuss this in detail.

When you photograph architecture, the shift function helps maintain your perspective.

Your desire is to pin an entire building into a given frame. In that regard, tilt your camera upwards. Those who have tried this before are familiar with the buildings and images sort of leaning backward.

The skew is brought about by the camera sensor plane tilted relative to that building.

Your ideal situation is when the sensor points ahead and remains perpendicular to the ground. When using a tilt-shift lens rather than angling the camera upwards you simply shift the lens.

The camera will remain put while the lens only shifts in its position. That way the appearance of your building remains straight.

This technique helps a lot when shooting the inside of high ceilings.

When shooting landscape photography the tilt-shift lens helps in minimizing the distortion arising from a wide angle lens.

And like I mentioned earlier, you can get good DOF of both foreground and the background.

The lens can also be used to capture panoramic shots.

One of the biggest challenges to panoramic shots is the stitching that arises in distorted shots that need correction.

Post-production corrections result in losing part of the scene.

The shift function of your lens creates a high resolution distortion-free panorama that requires negligible processing after completing your task.

You have the ability to control the depth of field when doing product shots.

The thing is that when shooting small objects, such as jewelry, the photographer often faces the issue of the object (or part of it) not being sharp.

Playing with aperture values doesn’t always help, so a tilt-shift lens would help control the DOF by tilting relative to the plane of the photographed product.

As you can see already, you can produce stunning images from a tilt-shift lens.

At the very basic, you can then capture two or more subjects irrespective of their distances from the lens.

You can also capture someone walking towards or away from you.

This specialized lens gives you the leeway to extend the focus plane in front or behind of your walking subject. That way the image remains sharp irrespective of the distance.

The tilt function helps achieve the miniature look we are all familiar with.

The miniature effect involves using a life-sized scene and transforming it to fit into a miniature scale.

Then lens purposefully adds blur to these photos simulating a shallow field of depth. This then resembles the appearance created when using a macro lens to shoot miniature models to scale.

To achieve this shot you must be in an elevated position – just about 10 feet. The elevation gives you the same viewpoint as if you were staring at a miniature model.

Over the past few years, the genre has become highly popular.

Taking a photograph of the real world and converting it into something miniature-like helps in achieving a model railroad setup.

We already know that tilt shift lenses can work with DOF and perspectives and that’s why you can make things look small.

(Once again, this can also be achieved with Photoshop if done right.)

This feature works best when the focal plane lies parallel to the sensor plane. You can use these lenses without having to apply the tilt-shift feature. This saves you the trouble of carrying unnecessary gear.

You can easily see the lens shift and tilt anytime you move. The movement shows you what effects are in play.

Before I wrap up, I’d like to answer the following questions:

As you already know:

The tilt-shift lens helps when controlling your focus plane.

The recommended lens for this kind of photography is the 35mm. These lenses blur out the less important parts of your photo and accentuate the object you intend to highlight.

Photographers specialized in the food and architecture sector can relate to the tilt-shift.

I mean you can easily fake the miniatures or even use them when popping the subject of the photo.

Tilt-shift lenses are quite pricey however you can achieve similar effects using less costly optics. Commonly referred to as freelensing or lens whacking, you can detach the lens then hold it right at the front of your camera when shooting.

(Older lenses are the best when using this technique as you can adjust them manually.)

Let me know in the comments below if you have any questions/thoughts on tilt-shift lenses and their purposes!