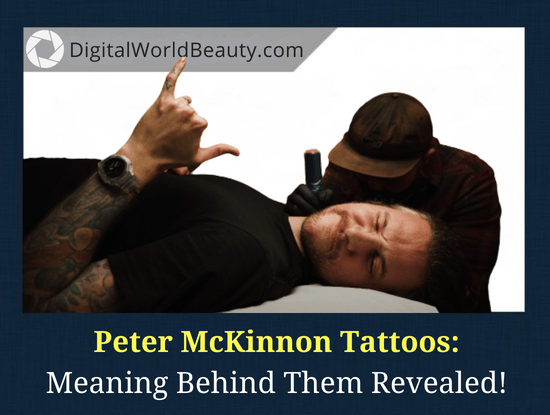 People have different ways of appreciating and showcasing art.

Some sing, others write, and there are those who love getting inked. Peter McKinnon, a well-known creative, is one of the many artists who proudly wear various tattoos as an expression of art.

Pete is always known to have a bold personality. This is not only evident in his video content and photography style, but also in his appearance. He has several tattoos all over his body, but as to how many there are, nobody knows.

If you are one of those who are wondering what McKinnon’s tattoos mean, then you’re in luck today! We will talk about some of the most significant marks on his body and you’ll get to know the artist who did them.

Is Tattoo Considered An Art?

Art encompasses a wide scope of specialization. Others express it through painting, some through acting, and there are people who show it through tattoos.

Tattoo as an art has always been a controversial topic, mostly among those who came from religious descent and conservative cultures. While we can go on and on about the pros and cons of getting one, it still boils down to the onlooker’s perspective.

For Peter McKinnon, it’s his way of remembering core memories and a form of expressing his love for the arts.

When Did Peter Start Getting Tattoos?

There’s no telling as to when exactly this Canadian YouTuber got his first tattoo. What we are certain of is that over the years he has become a public figure, he already got more than 10 tattoos on his body.

According to McKinnon, each piece he has contains a lot of stories and great memories he is fond of. For him, these are not additions to his body, but rather, they become part of him.

Who does Peter McKinnon’s tattoos?

The coloured tattoos were created by Jime Litwalk. But because this tattoo artist lives in the US and it’s not convenient to constantly travel, Peter connected with a local Toronto artist, Andrew Wilson (@andrewwilsonart). And as you can see, he does amazing black and white work.

Now, we all know Peter has several tattoos all over his body.

The real question is: what do Peter McKinnon’s tattoos mean? And how significant are they to him? Let’s find out!

This particular design is David Blaine‘s (illusionist) logo. McKinnon said he just liked how the spade was done and not just because he was a huge fan of DB.

When he was still working at StateFarm Insurance, he one day decided to take the rest of the day off saying he wasn’t feeling well. However, little did the company know that he flew to New York that very moment just so he could watch David Blaine perform live.

The magician saw his tattoo and recognized it – giving Peter and his cousin a free backstage pass to the event. And that’s how he met David, a performer he looked up to (he has an affinity for magic tricks since he previously worked in this industry).

His next tattoo is a phrase from the bible, Psalm 91 verse 4. In the scripture, it says “He will cover you with his feathers, and under his wing, you will find refuge”.

As to whether PM is a man of religious descent or not, we really couldn’t tell. But I guess it’s safe to say he has strong beliefs in the divine.

This is in reference to the Pearson International Airport in Toronto, Canada. Its significance to PM? That’s the place where he came from. Click here to read about Peter McKinnon’s bio in great detail.

I think we can all agree that Peter is a family guy, and he has proved that in many instances already. In fact, he tattooed this word on one side of his hand as a reminder that family always comes first.

McKinnon has a daughter who he adores. To the point that he was eager to put her doodle on his arm to commemorate her childhood. According to him, it takes you back to a certain timeline in the past. The memory must have been very precious that he went for this ink design.

This tattoo is very special since it was his mom’s idea. Since they loved birds and his grandfather liked riding motorcycles, he wanted to get a really cool tattoo with those elements.

Then one day his mom suggested just getting inked with a parrot riding on a motorcycle. But that was meant as a joke.

Little did she know, McKinnon was already so into the idea that he dedicated an arm sleeve for that.

This one too has a reference to his Schnauzer dog named Rusty, who used to carry around this little blue cartoon-styled octopus. PM loved the little guy that he felt he needed to have it permanently inked on his arm.

When McKinnon and his wife went to Maui for their honeymoon, he couldn’t help but admire the many wood tiki carvings on the streets. Since they were just starting off and they had no money to buy the actual thing, he decided to get a tattoo of it instead.

The thing about this particular piece is that it was done in full colors. Plus, the location was a very difficult spot which included what artists would call the “ditch”.

Peter got this tattoo with a friend, who is a legit card cheat, and he loves the movie Rounders, starring Matt Damon and Edward Norton (watch it on Amazon Prime today). Hence the tattoo.

McKinnon mentions in his video that a rounder is what you call a card cheat; however in the poker context generally used in reference to a person who plays poker for a living.

This vlogger shared that it was his first time tattooing anything inside his finger; and it was so painful to him that he thought about stopping at ’round’.

(Which has also become some sort of an inside joke.)

Of course, you’d expect nothing less from this guy. If he has a mark with his daughter’s doodle, what made you think he wouldn’t get one to represent his wife?

Well, this particular tattoo is based on his wife’s portrait while holding a camera with a red strap. It is located just above the bird mark on the same arm.

The thing about both tattoos is that they are all in bright and bold colors, one wouldn’t be able to miss them from afar.

Because he always says this line, it became something like an inside joke between the two. Hence, this is one of his favorite pieces so far because of the story behind it.

Check out the video below about the secret meaning to Peter McKinnon’s tattoos in full:

What to Do Before Getting a Tattoo?

Tattoos are permanent markings on your body.

So before you decided to get inked, it’s important to consider a lot of things. Are you committed to getting these marks on your body? Will you not regret the decision? Stuff like that.

And once you have decided to get that tattoo, here’s what you have to do:

You will need a good night’s sleep before your session. This will help you relax which can also minimize the pain, especially for first-timers. A well-rested body will allow you to be mindful of what’s happening and how your body is reacting to the session.

This will help properly condition your body for the activity that’s coming up. If you are hydrated, your body can function well and it will help you focus more on your goal rather than the pain.

Don’t get me wrong. You should not moisturize or apply any lotion to your skin on the day of the session. This will have an effect on the needle or the outcome of your tattoo. Since these marks will take time to heal, you won’t be able to nourish it with lotion for a while, so moisturizing days or weeks before is the best solution to that.

The last thing you want during your session is to pass out due to hunger. If you know you are having a long tattoo service, then you better eat up before it starts so you don’t end up asking for food in the middle of the activity.

A tattoo is a form of self-expression. If you’re happy getting inked, then that’s a choice you have to make, no matter what other people say.

Just like what Peter McKinnon emphasized, these marks represent a certain timeline in your life where you had the best stories and memories.

So you have every right to cherish them and put them somewhere you can see them permanently.