Can flash photography hurt your eyes? Let’s find that out!

At one point or another, you probably tried using a camera with the flash on, especially at night. While it helps illuminate your subject (or yourself in case you are taking a selfie), the sudden sharp light beam from the device is pretty annoying especially at a close range.

Most often than not, it momentarily disrupts your vision, which can last up to a few seconds (normally). But do you ever wonder if this has a long term effect on your eyes?

What Is a Flash and Why Do You Need It?

First things first, let’s talk about flash; what it is and why photographers need it.

It is actually a tool used in photography to produce a strong light beam quickly. This helps with subject lighting which is very essential when taking photos. Without it, indoor shoots will look darker and would require more editing time, which you probably won’t want.

The thing about using this while taking the shot is that you can get the right amount of lighting you’d want and post processing will not ruin the image’s quality since there’s little to adjust regarding brightness.

I’m sure you know that it’s harder to balance exposure, brightness and contrast in post than it is when composing the shot.

Most cameras come with built-in flash systems but this is not usually enough for indoor shoots. That’s why many photographers still use special and bigger lighting equipment that allows for bigger strobes and wider coverage.

Before I explain why studio strobes and other flash devices aren’t really something you need to worry exposing yourself to, I’d like to point out that there are in fact cases where light can damage the eyes. They are as follows:

High intensity light could burn the tissues in your eyes, which can cause permanent blindness. This is because light with high concentration will eventually produce more heat that could damage some parts of the eyes.

One very good example is laser. Have you ever noticed why laser treatments don’t normally take long? That’s because prolonged exposure could damage the skin, let alone the more sensitive tissues of the eyes. I’m not saying you cannot have a quick look on laser beams. It’s just that being exposed for a long period of time will cause a lot of problems in the future.

Actually, same goes why your parents wouldn’t advise you to look directly at the sun when you were a child (as if you can withstand the glare even for seconds). That’s because the light it emits also carries heat that has the power to burn optic nerves and tissues. Plus, it also contains harmful UV rays that adds to the deterioration of your eyes.

But don’t get me wrong. You can still take a quick glance at the glaring sun. However, it is always advised that you use sunglasses or tinted eyeglasses when doing so. This will help reduce glare and some glasses already come with UV blocking properties. Even with that eyewear on, you should never look at the sun longer than 10 seconds, otherwise, your eyes will suffer.

Similarly, exposing your eyes to extremely bright light for long periods will damage your retina, permanently. Ultra bright beams will cause your retina to malfunction and overexposure may lead to permanent disorder.

The retina is responsible for organizing the visual properties of everything that you see. In cameras, this part works the same as the imaging sensor. The retina contains millions of extremely sensitive cells that react to light. They transmit the images to and from the brain so that you can recognize what is in front of you.

Now, if you keep exposing your eyes to extremely bright source of light (both artificial and natural, by the way), then it will damage the cells in the retina. As a result, it can no longer let you see the things in front of you. What you can see is a blanket of white light.

However, lots of people say that this is not really a permanent condition. It can get better but your body will need to remake those damaged cells in order for it to function well again. And it takes longer to reproduce these cells naturally.

Camera Flash and Its Effect to the Eyes 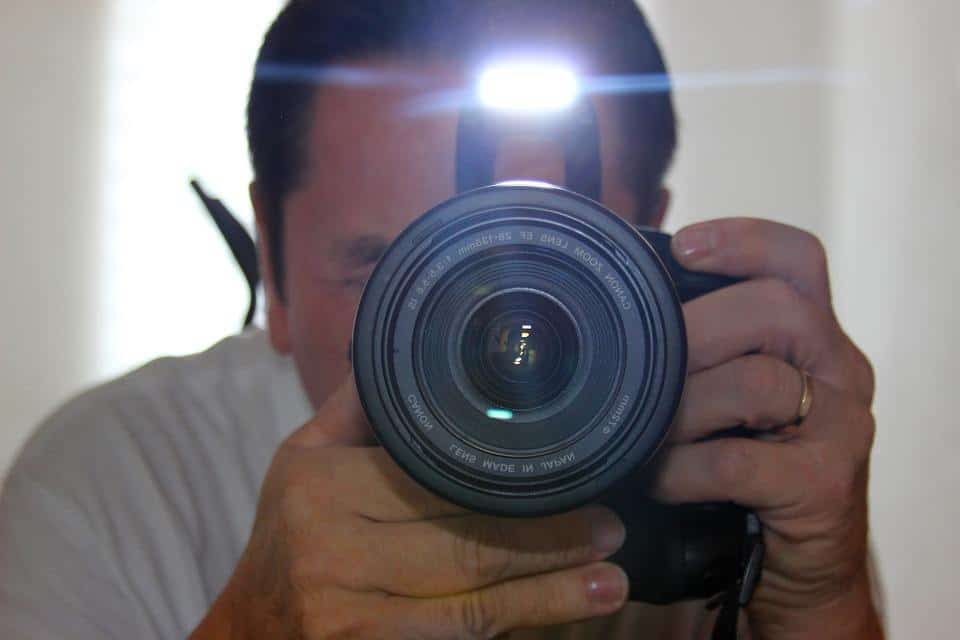 Now that you are well aware of what type of light exposure is damaging to the eyes, let’s talk in details about the quick light beams coming from photography equipment.

Is a camera flash really harmful for your eyes?

The answer is NO, and here are the reasons why:

The intensity from this photography device isn’t enough to cause damage to your eyes. Just imagine how many times celebrities are exposed to this beams yet they still have well-working vision.

Aside from that, the distance between the one taking the shot and the subject is often wide, so you don’t really feel any intensity from the device at all. It disperses as soon as it gets released from the strobes or other lighting equipment.

Again, I want to give emphasis to this: your eyes will not have permanent damage even if you look at ultra bright and high intensity light sources if you keep exposure very short (like 1-5 seconds). You will temporarily have blind spots, but that’s about it. In a matter of seconds, your visual clarity will get back to normal.

In case of length of exposure to light in photoshoots, it really doesn’t last the long. In fact, you will only be exposed for a tiny fraction of a second. This is nothing significant if you are talking about permanent blindness.

Just like what I’ve mentioned earlier, the beams get dispersed as soon as it is released from the equipment. Considering that you are in a room with plenty of space to move around, the system will be dispersed pretty well. It will not hit your eye directly. Instead, it bounces from the gear to you, the walls, and other people who are around you. So really, there is nothing to worry about.

There is no need to worry about being exposed to bright lights. Just remember to never let your eyes get exposed for too long and too close. And if you ever experience temporary blindness due to this, just relax and close your eyes. Give it time to recover from the shock of the beams and it will get back to normal in no time.

Q: Should you take photos of your eyes with the flash on?

Is it bad to take flash pictures of your eyes? Well, that depends on how long you are doing it for and at what distance. If you do it at a really close range for whatever purpose you may have, it would probably cause you to see blind spots in the next few seconds.

While this does not really cause a permanent damage, it is still not advisable to do so very often because it can cause dizziness and sometime nausea to people who have sensitive vision. If there isn’t really a need to do close up flash photography on the eyes, please refrain from doing it.

Can you blind a baby with a camera flash? Again, as long as the exposure is minimal and short, it won’t damage the eyes even for babies. In fact, nurses allow you to take photos of babies with flash because it is generally considered safe. But doing so very often is not very good. (And if I’m honest, I personally would avoid doing that in general as babies are fragile human being.)

Actually, no. As mentioned before, the intensity of light coming from these devices are very low and considered safe in general. However, if your pet doesn’t like it, you might as well refrain from using it. It is not good to cause your pet discomfort because it could lead to temporary erratic behaviour.

So, now we’ve figured out how flash affects people’s and animals’ eyes, but does it somehow ruin the paintings/artwork? Why is there a no photography allowed policy in museums and art galleries? If curious, check out this guide on the reasons behind the no flash photography sign/policy in those cultural places.