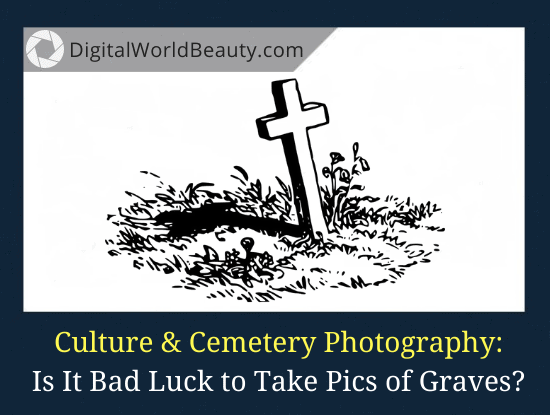 People have been photographing cemeteries for decades. The practice has become more popular in recent years, fuelled by the rise of social media, and there are now numerous photographers who work at graveyards realizing their artistic vision.

(I found this to be quite surprising, but maybe that’s because I’m one of the superstitious ones haha.)

Still, some people believe that taking pictures of graves is bad luck; if you want to avoid this kind of superstition, it can be helpful to understand why people developed those beliefs in the first place!

Today, we will be talking about those beliefs and see whether they have a reasonable basis or not, what you can do and cannot do when you are in a churchyard, and the relationship between culture and graveyard photography.

What is Cemetery Photography?

What is cemetery photography?

Cemetery photography is a specialized genre that involves taking images of graveyards, tombstones, headstones, or even events that happen in a burial ground such as funerals.

It takes a certain set of skills to get good pictures without being affected by the subject matter.

The churchyard can be an eerie place, with grey skies and overgrown weeds. But if you have the right equipment, the skills, and approach it in the right way, you can make some amazing shots.

Let’s talk about the reasons behind the superstitions surrounding this topic. So… is it ok to take pictures at a cemetery?

Culture and Cemetery Photography: The Correlation 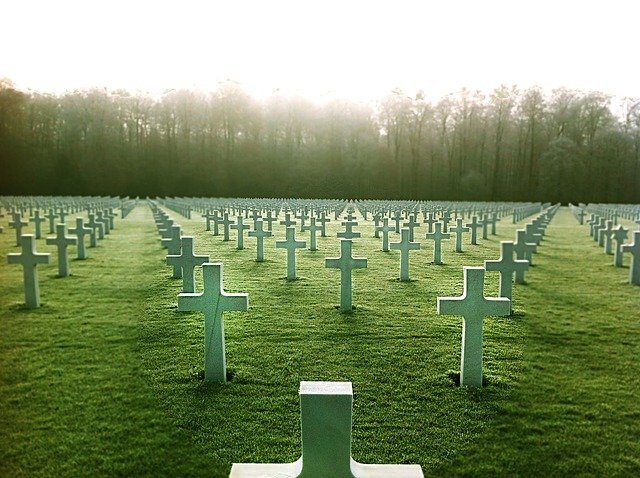 Honestly, whether you can take photos inside a churchyard or graveyard depends on the culture of the place you are visiting.

While most places impose no restrictions on having photoshoots inside these venues, there are quite a few (especially those coming of conservative descent) that have strict rules when it comes to activities like this.

To better understand why some places don’t allow you to take pictures of headstones, or of anything inside the area, let’s talk about the different cultures and their beliefs about graveyard photography.

Some cultures believe that taking pictures of a grave will bring them back to life.

Though I personally don’t think this is possible, there are some people who believe that taking photos of the final resting place of the dead will bring them back to life. They strongly believe that doing this will only wake the dead up, causing them to “want” to return to being alive.

If you ask people in the scientific field about this, I’m pretty sure they are going to dismiss the idea in the blink of an eye.

However, we are still bound to respect this belief especially if you are only visiting the place as a tourist. This way, you will not upset the local community with your actions and there’s a good chance you won’t get banned from entering the place again.

Other cultures believe that it’s disrespectful to take pictures of graves and cemeteries.

This one, I believe is very reasonable. Being laid to eternal rest is something serious and deserves respect. This matter is never one that should be taken lightly. The family left behind by the dead could still be mourning and grieving over the loss.

For instance, if you only want to take pictures to make fun of other people’s grief, then that would be utterly rude. Another example would be an unfitting theme for the location such as portraying a playful and cheerful character in the midst of the churchyard, which just totally seems off.

We all know graveyards symbolize loss, sadness, and grief. So seeing models smile brightly in the middle of the headstones will totally be insulting both to the dead, and the living families.

So you see, I totally understand why some cultures would frown upon these acts. If you do it for the above-mentioned reasons, then it would seem like you are not giving due respect to people who just lost their loved ones, much more the ones who had an untimely death.

I know that’s frowned upon in Christianity. I’m not Muslim but it seems that Islam doesn’t appreciate it too, and my guess nor do other religions.

Few other cultures believe that it disturbs the souls of the dead buried in the cemetery.

Up until today, many people all over the world still believe that doing other activities inside the burial ground (aside from visiting or paying respect) disturbs the souls of the dead. A lot of us, myself included, believe that putting a dead body to its final resting place would also mean putting its soul to rest.

As much as you try to be discreet while taking on the shoot, there might be times when you can’t help but step on graves, headstones, or markers. This is believed to disrupt the peaceful sleep of the people buried underneath.

It’s just like stepping over a sleeping person, they say.

Some cultures believe that taking photos of the dead/tombstones passes on bad energy to the living.

While there aren’t proven scientific explanations for that belief, many people still choose to believe that. Spiritual gurus of different religious origins often tell us that photos have the ability to capture the energy of the subject.

As in this case, you never really know what kind of energy the dead possesses, right?

That could be one of the reasons why some places don’t allow you to take photos on the burial ground. They are afraid that the photos could spread bad energy and bad luck among the people who will see them once printed or reviewed.

But in reality, is it really bad luck to take photos of the grave?

Well, that depends on whether you believe the superstition or not. I personally believe we make our own life, but I also don’t like the symbolic aspect of it, so that’s why I am not a fan of this genre (and definitely don’t find it therapeutic).

So if you still feel you’d like to experiment with this genre, then here is the cemetery photography etiquette you should follow.

What can you really do and not do in a graveyard? Some do’s and don’ts that will help you have a smooth and successful churchyard photoshoot.

If you plan to take photos of specific headstones for whatever purpose you may have, you may want to ask the family first before taking pictures. Sometimes, there are families who want to keep their privacy, and there is nothing else you can do but abide by that.

If you do have someone’s permission, always make sure it is not an emotional event such as that in a funeral. This event is very personal among the people attending the event. It is not so nice to crash and randomly take pictures just because you happen to be at the same place in the moment.

But of course, if you were hired by the family to cover the burial, then by all means do what you need to do as a photographer. Just make sure you don’t get in the way of mourners.

Death is such a sensitive topic.

So as much as possible, give due respect to the dead. You can do this by not stepping on the markers intentionally, or just being as discreet as you can while doing the shoot. That way, you won’t disturb (the dead) the people who came to visit their departed loved ones.

Also, don’t leave any litter behind. Most graveyards are private and the families pay for the maintenance of the graves. As a way of respect, you should not take anything from the grave or leave anything behind that was not originally there.

There are people who wish to hire photographers to take photos during funerals. Even if you were hired by the family, it is important to always know when to take photos and when not to.

Though most camera shutters these days have silent mode, it could still disturb some very solemn burial rituals. Also, just avoid using flash because it can distract mourners and even the funeral presider.

This is pretty self-explanatory. Headstones function like markers that the person lies there. Taking a photo of vandalized gravestones is highly discouraged for a variety of reasons.

Among the strongest reasons is that, once the photo is posted publicly, the families and friends of the dead person might recognize the marker. This might get you in trouble especially if you didn’t have permission to take the shot there.

Another reason could be that people might think it is okay to doodle and vandalize graves because they saw one posted on the Internet. As much as you can, just avoid doing this and continue to respect other people’s final resting place.

Markers have the dead person’s name, birthday, and other personal information that could potentially lead to privacy issues when publicized. So as much as possible, blur the personal details if you must really shoot the headstone.

People visit the cemetery to pay respect to the dead and remember the memories they left behind. Don’t intentionally take pictures of them especially if you don’t have permission. You never know whether they are done grieving or not. It is utterly rude to butt in at times like this.

In case you were still wondering is it legal to take pictures in a graveyard, the answer is: it depends. It depends on the culture of that place and the rules of the burial ground you are visiting.

If you are unsure whether taking photos is prohibited, might as well head directly to their office and ask. There’s no harm in getting permission, you see.

Bottom line is, if you want to do a shoot in places like this, always pay due respect to the dead, the living visitors, and the place as well. Do what you have to do and leave immediately once you are done.