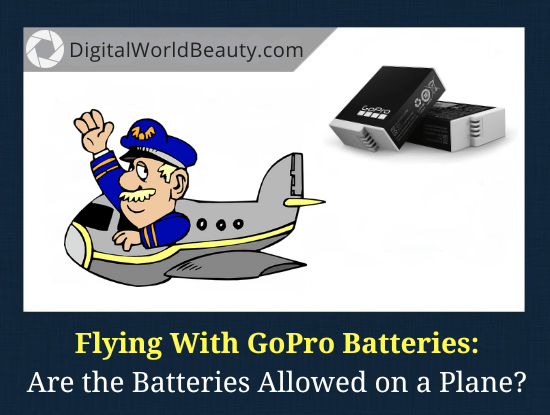 This is an in-depth guide on flying with GoPro batteries. Will the customs officers let you through, or will they confiscate your gear?

Are GoPro batteries allowed on a plane? TSA has laid down guidelines about boarding planes with digital cameras, batteries, and other accessories, and YES, you can fly with them. However, they must be in carry-on, NOT in checked baggage.

In the past, you could put them in checked baggage, but the rules have since changed, and you can only have them on you.Airport authorities and flight operators previously banned lithium ones from flights due to the possibility of an explosion.

The fear had been inspired by some cellphones exploding during flights. However, you have a higher chance of being hit by lightning than a GoPro battery exploding on you.

Keep in mind that you can only put them in your cabin baggage if the batteries are inside the camera. While it may seem inconvenient, digital cameras and accessories have been known to get lost in checked luggage.

Don’t worry about buying camera accessories at inflated prices in other countries. You are free to carry along yours. Note that anything bigger than a smartphone, including your camera, must be scanned before boarding the plane.

Many modern electronic gadgets have lithium-ion batteries, and GoPro brand is no different. A lithium-ion one uses special technology with lithium ions at the core of its electrochemistry. Lithium atoms release their electron in the anode during a discharge cycle.

The electron-free lithium ion then moves to the cathode through electrolysis. The ions rejoin with their lost electron and become electrically neutral.

Manufacturers choose lithium ions because they are small enough to pass through a micro-permeable plate that separates the cathode from the anode. Lithium ions are very small, coming third after hydrogen and helium.

This property enables li-ion batteries to have excellent charge storage per unit volume and mass.

These can be combined with several materials, with graphite often used for the anode and cobalt oxide for the cathode. Due to their capacity to hold high voltage, they are often placed in portable electronic devices, including laptops, cellphones, and GoPro digital cameras.

(Electrical automobiles also use lithium-ion batteries with lithium iron phosphate at the electrodes.)

Let’s now look at TSA guidelines on this subject matter.

GoPro Through TSA and Airport Security

You must be wondering what you will go through before you get your technology gear and accessories on the plane.

There have been rumors of people having trouble with airport security or even customs officers. TSA has clear directions on the battery capacities, numbers, and how you should package them.

Let’s look at them in greater detail.

Most modern electronic gadgets use lithium-ion batteries. This includes strobe heads, smartphones, tablets, laptops, and your digital camera. According to TSA, these should be under 100 watt-hours (Wh) to be allowed on a plane.

GoPro meets this requirement, and it’s, therefore, safe to bring your GoPro batteries along.

All you need to do is check in your camera and accessories, then put them in the carry-on before boarding the plane.

Suppose you want to carry extra batteries for power backup. Should you go ahead and do so? Spare batteries are subject to the same rule. They should be under 100 Wh, and you shouldn’t have the extra ones in checked luggage.

TSA insists you put them inside the hand luggage. In case the terminals touch, short circuit, or explode, you will incur the damage yourself.

Please note that there isn’t any weight restriction on them. You can have extra two or three pairs as long as they are under 100 Wh.

By this point, it’s clear that TSA doesn’t like batteries on a plane because they can explode and cause fires mid-flight. You need to pack them properly to prevent such occurrences. How do you ensure TSA won’t be on your neck for improper packaging?

You have to ensure that your spare accessories are not naked. The electrode or contact points are responsible for shorting and exploding when the nude terminals touch each other. Cover the electrodes with electrical tape.

Better still, let the GoPro batteries remain in their original boxes. The boxes have product descriptions on the side, saving you from being questioned by airport security.

Another option is using plastic zip-lock bags to secure them. Just remember to have a separate bag for each battery.

Ensure that you are not carrying many of them for commercial purposes. If you have many, TSA will likely flag you down for interrogation. Only bring enough and have them adequately packaged to avoid this headache.

How Many GoPro Batteries to Take on a Plane?

So far, you have already learned you can board a plane and we have even established that you can carry extra accessories. But how much is too much? Is there a limit?

TSA allows you to take as many as possible on your next flight. There is no set maximum.  (For example, some users had 6-8 and they were fine.)

The only exception is they should not be for sale. Just observe all the TSA rules on this subject matter, such as the voltage and safety packaging. Everything should go as planned.

Generally, there are several camera battery types. GoPro ones are rechargeable.

Suppose the area you are traveling to doesn’t have electrical power. Just imagine shooting nature pics in a jungle, but the nearest electrical connection is hundreds of miles away.

You will need a power backup which means carrying bigger batteries than the standard GoPro. The question now shifts to can you bring along one that exceeds 100 watt-hours?

The answer is a big YES!

The maximum number of bigger batteries to carry is 2.

You can fly with two big batteries with a voltage exceeding 100 watt-hours but below 160 watt-hours. For instance, the first lithium one can be 150wh and the other 110-watt hours. But TSA guidelines must be followed to the letter.

Please remember that the large-capacity batteries should not be checked-in. Please put them in your hand baggage instead. Keep in mind that there are weight restrictions. Don’t carry too many even if the voltage is within limits. The GoPros should not be for resale.

These regulations apply to most international flights.

Power banks are now a common feature in many households. You must wonder whether they are allowed on a plane with your GoPro batteries. It depends on the amount of voltage it can hold.

Luckily, most power banks meet the TSA guidelines meaning it is okay. However, have a second look before boarding the plane.

You probably are going for summer vacation overseas. It will be fun, and you don’t want to miss any part. A camera powered by GoPro batteries is the best way to preserve memories far into the future.

Luckily, you can totally fly with most, including GoPro batteries, as long as they don’t exceed 100 watt-hours. No amount limit means you can carry as many as you want.

In case of those exceeding the 100wh, you can only carry two. The two can exceed 100wh but try to stay below 100wh.

And finally, don’t check in the luggage. Put them in your carry-on instead.