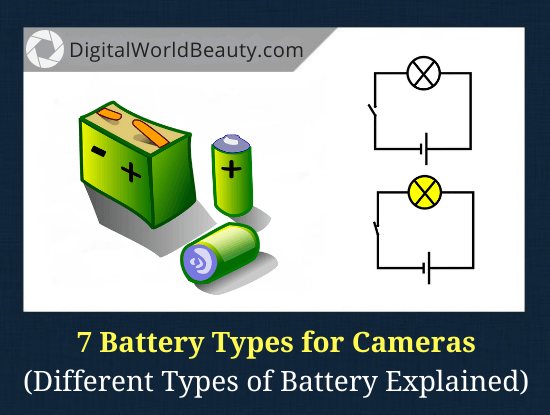 This is a complete info guide to types of batteries for cameras that are available today.

It’s not a typical post we publish here at DWB, with some chemistry terminology, but if you’re ready to “power up”, then this post is for you.

The days of mechanical film cameras are a thing of the past. Today, no camera can live without electronic components, which means that it needs to be supplied with power.

Any photographer who doesn’t want to be tied down in a studio with an outlet has to take a charged power source before they go out to shoot.

Without a doubt, there has been significant progress in the development of compact and at the same time powerful power supplies for all kinds of electronic devices, including digital cameras.

All batteries can be divided into two broad categories depending on how the energy they generate is produced.

The elements of the first category include disposable batteries that produce energy through chemical reactions, as a result of which the anode, cathode and electrolyte undergo irreversible changes.

Therefore, after discharge, such batteries can only be thrown away; recharging of these cells is impossible.

Disposable batteries are used in many digital point-and-shoot cameras that don’t have a large capacity, can’t be used for lengthy shooting capabilities or have high image quality.

Some digital cameras, in addition to their own battery, also operate with disposable batteries, which can be purchased at any online or physical store.

The second category includes rechargeable batteries, the ones that we always assume right away.

Since chemical reactions in them are reversible, they store that energy. If a direct current source is connected to the electrodes of such a battery, then it can be recharged at any time.

Naturally, comparing these two classes, rechargeable batteries seem to be the obvious choice. They can be used for quite a long time without any issues, by regularly recharging it before shooting.

In digital photography, they use AA and AAA type of disposable batteries. Now, the rechargeable batteries can also be made in housings of standard AAA and AA sizes, or have their own proprietary design, due to the peculiarities of a particular digital camera.

Now let’s figure out what types of disposable and rechargeable power supplies exist, what are their disadvantages and advantages. 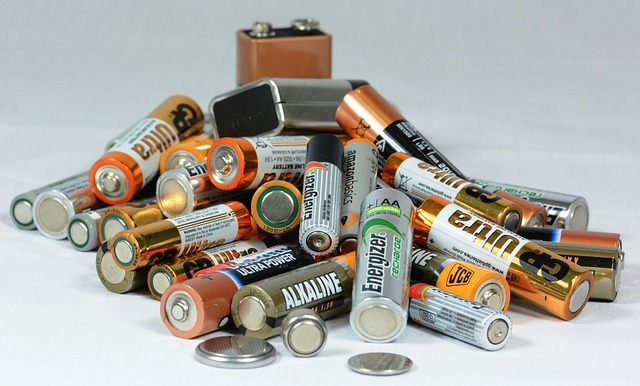 The salt batteries were previously used in budget film cameras. These are, in particular, zinc-carbon dry cells, which use a manganese dioxide anode, an ammonium chloride electrolyte and a zinc cathode.

By virtue of their characteristics, zinc-carbon elements are able to “recover” during a break in operation, so the service life of such elements can be extended. However, in general, salt-based batteries are characterized by a short lifespan, the efficiency of their use is influenced by temperature drops.

In film cameras, salt batteries are used mainly for the operation of a low-power flash or film rewinding. The capacity and specific power of zinc-carbon cells are not too high, which makes their use in digital devices impractical.

The only advantage of salt batteries is their low cost.

They are not used in digital devices due to the high power consumption of the latter. In comparison with salt cells, alkaline batteries have a rather long shelf life (4 – 5 longer than zinc-carbon cells) and have a good energy capacity.

However, they begin to “shrink” from the first moment of use, as a result of which their nominal voltage gradually decreases. At the same time, alkaline batteries are affordable, which makes them quite popular.

Lithium power supplies can be used in high-end cameras that have relatively modest power consumption (such as, amateur film cameras and mechanical SLRs). In them, lithium batteries can be responsible for the operation of the exposure meter.

Lithium cells have a high capacity and long shelf life due to their resistance to temperature fluctuations. They work until they are almost completely discharged, which allows them to use their nominal capacity to the fullest.

Disposable lithium batteries are reliable, energy intensive and weatherproof, but their high cost is an obstacle to their widespread adoption. So, you can use such batteries only to power individual units in cameras that consume relatively little electricity for a very long time.

Nickel-cadmium batteries can be used in both film cameras and low-end digital cameras. They are convenient in that they are made in the widespread AA form factor, with a large number of chargers available for them.

These are quite lightweight and relatively energy intensive. Nickel-cadmium batteries, unlike the aforementioned types of power supplies, are classified as rechargeable.

Their advantage is that they are able to withstand a large number of recharge cycles (up to 500-1000) without significant deterioration in their characteristics. At the same time, these batteries contain toxic cadmium, so certain care must be taken when using and disposing of them.

With a nickel-cadmium battery, it is almost impossible to determine the current state of charge. Plus, due to the formation of nickelate in the negative cadmium electrode, such batteries have a so-called “memory effect” that causes them to hold less charge.

Where nickel-cadmium batteries use a nickel anode and a cadmium cathode, this type of power source uses a hydride cathode and a nickel anode. Accordingly, there is no toxic cadmium here, which is already an advantage. There is no notorious “memory effect” either.

The advantages of nickel-metal hydride batteries include their higher energy consumption in comparison with nickel-cadmium power supplies. This means the digital camera will last about 50 percent longer.

But these batteries also have their drawbacks.

First, NiMH batteries are more susceptible to self-discharge and can lose up to 5 percent of their charge per day. Secondly, when charging, such batteries generate heat, and when a full charge is reached, it can heat up quite significantly.

As a consequence, different batteries of this type have to use different chargers. It is also worth noting that nickel-metal hydride batteries are capable of operating in a narrower temperature range (up to -10 °С and not higher than +40 °С).

Most modern digital cameras are powered by lithium-ion batteries, which operate at high currents. These can be built into the camera. Lithium-ion power supplies are widely used in laptops, PDAs, and other mobile gadgets.

Li-Ion is characterized by high discharge voltage and significant energy consumption. Rechargeable lithium batteries are now available from many companies. They allow from 500 to 3000 recharge cycles, so they can last for quite a long time when doing digital photography.

The advantages of these, in addition to their high specific electrical capacity, include low self-discharge. They are also capable of operating over a wide range of discharge currents and temperatures. Lithium-ion batteries are certainly superior in performance to traditional nickel-cadmium power supplies.

Lithium-polymer batteries have replaced lithium-ion batteries. This new generation of rechargeable power supplies with higher specific characteristics has been developed for use in a wide variety of portable gadgets.

Their main distinguishing feature is that at the same specific gravity, lithium polymer batteries can store about 20 percent more energy than comparable lithium-ion batteries.

Moreover, their advantage is the ability to manufacture in various plastic geometric shapes, which ensures their lightness and thinness due to the absence of an external metal body.

Thanks to this, lithium polymer batteries are increasingly used in modern digital photography gear, the manufacturers of which are trying to make their devices more compact and at the same time energy efficient.

Power supply technologies for cameras and other digital devices are currently developing at a rapid pace. Perhaps very soon we will see new type of batteries in digital camera models, which are distinguished by even greater power consumption and wider functionality.

This material was translated from Fotokomok. Let us know your thoughts on camera battery types in the comments below!